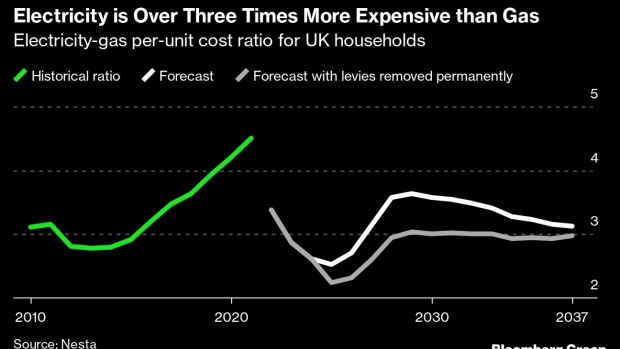 The electricity-gas gap has narrowed in the UK over the past year: Electricity used to be four times as much as gas. But that’s only because energy prices are up across the board, and the Europe-wide crunch is stymieing any government hope of making electricity prices more palatable in the near future.

“We need to demonstrate to people that a heat pump is going to be cheaper to run than a gas boiler,” Martin Callanan, the UK’s minister for business, energy and corporate responsibility, told Bloomberg UK earlier this month. But now is a “politically difficult” time for energy reform, which will take “a number of years.”

The UK doesn’t have time to waste on the clean-energy transition: It aims to get to net zero by 2050. But the uphill battle to bring down electricity prices is indicative of how complicated navigating that transition can be in practice.

1. How much does UK electricity cost?

Since 2019, a “price cap” managed by regulator Ofgem has set the maximum amount that energy companies are allowed to charge households. But the cap, designed to protect consumers from suppliers charging beyond the market rate, doesn’t protect consumers from fluctuations in the market rate itself.  When that price rose earlier this year, so too did the cap and people’s utility bills — so much so that the government intervened with an “energy price guarantee.” The guarantee, which lasts until April 2024, caps electricity prices for consumers at 34p per kilowatt hour, and gas at 10.3p per kilowatt hour. There is also a standing charge of 46p per day for electricity and 28p for gas.

The guarantee means the average household energy bill will total around £2,500 ($3,061) in the UK this year. Most of that average (about £1,300) comes from the significant amount of gas used in heating and cooking, but the per-unit price difference between gas and electricity makes using more electricity unappealing. Analysis by Which?, a consumer research company,  suggests the cost of heating a home with electricity is around double the cost of heating it with gas.

2. Why does electricity cost more than gas?

For the past decade, the UK’s investment in renewable energy, as well as subsidies for energy and insulation for poorer households, have been tacked onto electricity bills rather than gas bills. Until recently, this was a big driver of the price disparity: Last summer, levies made up as much as a quarter of the average UK home’s electric bill. But as electricity prices climbed, levies’ share of the average bill fell to around 10% earlier this year, according to analysis by the Energy & Climate Intelligence Unit.

The bulk of the price for electricity is determined by what’s known as “marginal cost” — the amount charged by the supplier that steps in to balance supply with demand. In the UK this is, ironically, natural gas, which low-efficiency power plants can provide by firing up on short notice. Essentially, using gas for electricity is far more expensive than using it in the gas grid, in boilers or ovens. Transmission costs are also higher for electricity than they are for gas.

The UK electrical grid used to be a lot more polluting than it is now. But over the past decade, renewable energy has replaced coal and other carbon-intensive fossil fuels. Britain is now also trying to wean itself off natural gas in an effort to meet climate goals.

Around 85% of people currently heat their homes with gas boilers, for which the most widespread replacement is likely to be a heat pump, a highly efficient form of electrical heating that under ideal conditions produces three to four units of heat for every unit of electricity. Government targets are for 600,000 new heat pumps to be installed each year by 2028.

Shifting the levies currently assessed on electric bills to gas bills would send the signal the climate needs, making electricity cheaper and gas pricier in one fell swoop. It would also track with government goals: In a heat and buildings strategy published last year, the Department for Business, Energy and Industrial Strategy (BEIS) said it would “shift or rebalance energy levies…away from electricity to gas over this decade.”

Climate and energy groups are calling for this to happen sooner to incentivize the takeup of cleaner technologies like heat pumps. And doing so now — when the government is paying for the levies as part of its price guarantee — might be ideal, before the guarantee expires and levies appear on electric bills again come April 2024.

For now, the government is consulting on methods by which it might decouple the cost of gas from electricity’s wholesale price, nixing the arrangement that lets the marginal supplier set the market price. But this won’t start until the “mid-2020s” at the earliest, according to the consultation.

Analysis from the research agency Nesta suggests the gap between electricity and natural gas prices will narrow naturally over time, too. As more renewable energy comes on to the grid, it will reduce the frequency with which gas power needs to be fired up. Moving the levies into general taxes or onto the gas bill would, however, make this happen more quickly.

5. Why not shift the levies to gas now?

In short: Because everything is already too expensive.

The European energy crisis has driven up prices across the board, and making gas cost more — even in the interest of spurring clean-energy adoption — would add hardship for millions of British people already suffering fuel poverty this winter.

There’s evidence that the UK had been planning to make this shift right about now. Last year, the government said it would call for evidence on moving levies onto gas, “with a view to taking decisions in 2022.” But there is no sign of this review and no decisions yet taken.