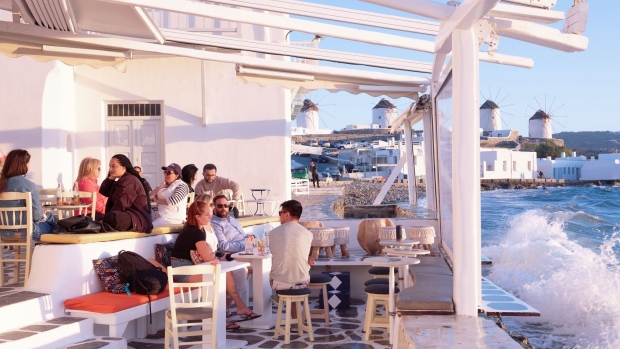 Customers sit at a terrace of a cafe by the sea during sunset in the Little Venice area of the old town in Mykonos, Greece, on Sunday, May 9, 2021. Airline operators in the U.K. are pressing U.K. officials to add Greece and Spain to the list of countries marked green in the traffic-light border system unveiled last week. , Bloomberg

(Bloomberg) -- Greece will open to international tourists this week, as the government tries to kick-start an economic recovery.

The nation is open for international visitors who have completed their vaccinations, have a negative virus test or show proof of having antibodies after infection. Greece recognizes all shots, according to the government, which also plans to introduce random testing.

“Priorities have been overturned lately in the lives of all of us,” Tourism Minister Haris Theoharis said Thursday. While this year will be an improvement on 2020, he also warned the government will close borders again if necessary.

The battered industry accounts for over a quarter of Greek jobs and around a fifth of the economy. It’s often the main employer in regions where other industries are absent, providing crucial income for families and support for local economies.

Greece will lift most remaining lockdown measures, including a ban on inter-regional travel on the mainland, this week. Trips to islands, where locals are expected to be fully vaccinated by the end of June, will be allowed with a vaccination certificate or negative test. A night curfew will be in place, beginning at 12:30 a.m.