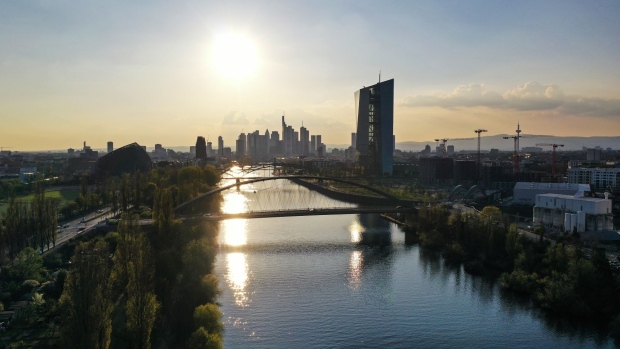 (Bloomberg) -- In a countryside retreat near Frankfurt this weekend, European Central Bank President Christine Lagarde and her colleagues will try to settle the last remaining arguments in the biggest overhaul of their monetary policy in almost two decades.

It’s the first time since the outbreak of the pandemic that the entire Governing Council will meet in person, letting the 23 men and two women jettison the virtual-conferencing that they’ve struggled through in nearly a dozen previous debates. Their aim is nothing less than to retool the ECB for the 21st century, with a new inflation goal, better ways of measuring the economy, and agreement on how to treat issues such as climate change and inequality.

The getaway marks the final phase of a process that started 18 months ago, was derailed almost immediately by the coronavirus, and included such moments as Lagarde banning online chatrooms and a policy maker reciting medieval poetry.

Results are expected ahead of the annual ECB Forum on Sept. 28-29, and the president might immediately be attacked on topics such as global warming for falling short of activists’ demands. Yet the review has also allowed a fresh look at profound economic trends, generating thousands of pages of insights to inform policy decisions in the post-pandemic world, potentially for decades.

This is how the ECB got there, based on the accounts of more than 20 people involved, who spoke on condition of anonymity.

‘Each and Every Stone’

The idea of a review was first publicly broached by Bank of Finland Governor Olli Rehn, in late 2018 in what was widely seen as part of a pitch to succeed Mario Draghi as ECB president. When Lagarde — previously a politician and International Monetary Fund head rather than a central banker — was unexpectedly appointed, she embraced the concept to stamp her leadership.

Since the previous review in 2003, the euro area had grown from 12 members to 19, suffered two major crises, and seen the world economy fundamentally change. Inflation had languished below the ECB’s goal for years, threatening its credibility, and the vague target of “below, but close to, 2%” was part of the problem for some. Others fretted that the link between employment and inflation had broken down, that globalization and digitization were undercutting prices, or that Europe was stagnating as its population aged.

Policy makers were also ready to regroup after the often-fractious Draghi years when controversial tools such as negative interest rates and quantitative easing were deployed. With the motto that it would leave no stone unturned, Lagarde announced the review in January 2020, less than three months into her role.

Of the eight initial “workstreams,” climate change — which Lagarde is passionate about — immediately became one of the most divisive issues, with some officials worried they were being dragged into matters that elected politicians should handle. The inflation goal, while more technical, also held potential for disagreement. The aim was to spend several months on the analysis and announce the results at the end of the year, shortly after the U.S. Federal Reserve concluded a similar reappraisal.

Then the pandemic tore up those plans. March of last year was dominated by collapsing markets, virus lockdowns, and a scramble to come up with monetary support for the paralyzed economy, culminating in the ECB’s most powerful bond-buying program ever implemented.

Read more: How Lagarde’s ECB Went From No Need to No Limits in Four Weeks

A debate on the review scheduled for April 1 was postponed by six weeks, then indefinitely. It wasn’t until the summer that Lagarde felt the crisis had ebbed enough to resume, in September, with an expected end-date a year later. When it did, the workstreams expanded to 12 — employment, despite its importance for wages and inflation, was only added as the 13th in early 2021. Roughly 650 people were put to work, with several hundred more involved in coordination.

The whole operation is run by the Monetary Policy Committee, made up of ECB and national central bank staff, and overseen by Chief Economist Philip Lane. Frank Smets, director general for economics and a former adviser to Draghi, leads the project office.

The exercise is far larger than the previous one, which involved two tracks, one division in the economics department and a few colleagues from research, and lasted seven months. It’s similar to the Fed’s review, which comprised a “Fed Listens” initiative, a conference and five consecutive policy meetings starting in July 2019, before the results were announced in August 2020.

Lagarde insisted the process be “inclusive,” so industry groups, non-profits, academics, lawmakers and the public got their say. There were 18 “listening events” — originally to be held all over the euro zone but ultimately virtual — and nearly 4,000 people answered an online survey to list concerns as diverse as inflation, housing costs, employment conditions, inequality and the environment.

Officials spent five months on topics such as inflation measurement, price trends, and policy tools before a midterm reflection in February. Since then, they’ve focused on broader themes including financial stability and the interaction of fiscal and monetary policies.

Some joke that whatever they decide, they’ll at least leave an excellent body of research behind. Policy makers are swamped with materials before each debate. Some say they’ve filled numerous binders in an attempt to read it all, while others have relied on their staff to drill into the findings. The session on policy tools ran to 500 pages, and the one the two-pillar strategy of economic and monetary analysis to more than 800 pages. Being stuck at home rather than traveling has helped them cope.

Presentations are vetted by the MPC and the board before going to the Governing Council, but Lagarde was still irritated when early ones dragged on for as much as an hour and a half.  She eventually managed to shorten them to 30 minutes or less.

Officials learnt to listen carefully to how much time the president intends to spend on each topic, calculating how long they could speak before eyebrows were raised. Bank of Italy Governor Ignazio Visco is said to be among the most talkative. With the sessions online — the ECB uses Webex — they also had to master how to raise their hands virtually, though a secretary still keeps track of whose turn it is to speak.

Lagarde has been known to ask those who turned their camera off or away if they have more important business. Parallel chatrooms were barred after she expressed her displeasure that some people used them during a debate on climate change, arguing that they were distracting and wouldn’t be in the official record.

She usually waits until the end to share her views, and colleagues say she’s good at synthesizing the debate, though many wish the takeaways from discussions would be more conclusive. The fact that they aren’t reflects the president’s stance that nothing is agreed until everything is agreed. Lagarde has also repeatedly asked policy makers to refrain from publicly commenting on the review — including in the runup to this week’s retreat.

Two major issues at that session will be the inflation goal and climate change. The inflation target is vital for monetary policy, even if the options might look like minor tweaks. There is broad consensus that it should change, but disagreement on what to. Some favor a precise goal of 2% with flexibility to reach it, and some — especially from southern Europe — want an explicit pledge to tolerate higher rates after shortfalls.

That latter strategy would echo the Fed, which settled on an average target of 2% that gives it room to overshoot or undershoot when warranted. Rehn urged something similar, and Lane acknowledged the argument, but floated a “symmetric” response — reacting equally to too-high or too-low inflation — without insisting on a symmetric outcome. That would mean price growth doesn’t have to average 2% at all times.

The talks on climate change have been among the hardest. Lagarde wants a full-throated contribution by the ECB to the fight, and was said to be disappointed at times by how much she’d achieve. While she has supporters in the Governing Council, plenty were worried it’ll distract from their pursuit of price stability. Some said it’s illogical to fight climate change but not issues such as inequality.

A key tussle is over the current principle of mirroring the composition of the market when buying bonds, known as market neutrality. It’s important to officials who say they shouldn’t be in the business of favoring certain industries, but it means buying a lot of debt that finances carbon-intensive businesses.

Lagarde’s opinion was reflected in an invitation to Lord Nicholas Stern to address the Governing Council, the only outsider to do so in the review. The London School of Economics professor warned of the inadequacy of neutrality, and his institute has since issued a guide urging the ECB to take a net-zero emissions approach across all operations.

The debate prompted one governor to channel Dante Alighieri, the 13th century Italian poet and philosopher, by saying “the hottest places in hell are reserved for those who, in times of great moral crisis, maintain their neutrality.”

It fell to Lane to cheer him up, saying he was confident a compromise could be found. This weekend, that will be Lagarde’s goal.