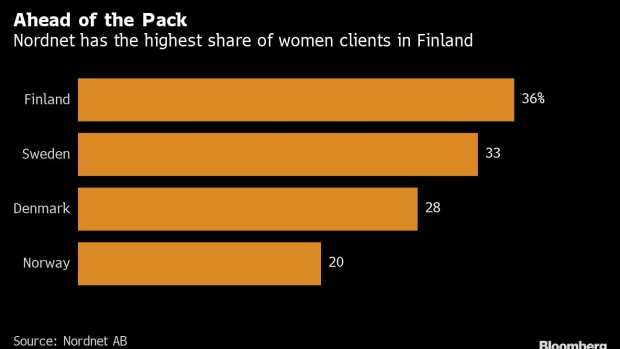 (Bloomberg) -- In Finland, the happiest nation on Earth, women have started trading a much larger chunk of the stock market in a development that’s suddenly given them an edge in one of the world’s most egalitarian regions.

The number of Finnish women trading stocks and funds has doubled over the past two years and now makes up more than a third of the total, according to Nordnet AB, one of the Nordic region’s main retail brokers. The development coincides with efforts in Finland to become the world’s most financially literate nation.

In Finland, as in the rest of the Nordic region, it’s far less common than in the U.S. to turn to the stock market to boost savings, because of the way the pensions system works. So stock trading tends to be viewed as an extra income opportunity on top of employment-related pensions.

Nordnet’s data show that trading by Finnish men rose 56% over the two-year period. Tuppurainen says the broker has worked for years to bring in local celebrities and influencers for social media campaigns designed to appeal to women.