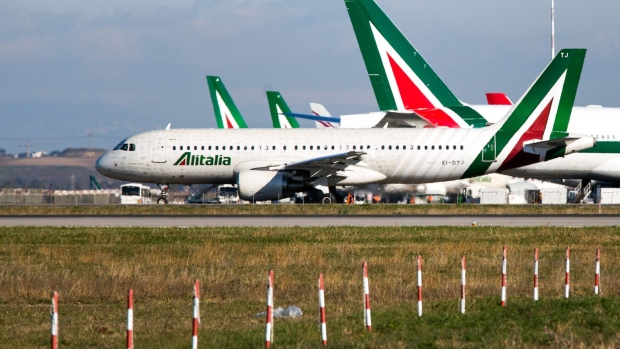 An Airbus SE A320 passenger aircraft, operated by Alitalia SpA, aircraft taxis on the runway as it prepares to take off from Fiumicino airport in Rome, Italy, on Wednesday, Jan. 4, 2017. Alitalia shareholders approved Etihad Airways PJSC investment of up to $231m, Etihad became Alitalia's largest shareholder in 2014 as part of the Persian Gulf carrier's attempt to gain a European foothold by strengthening struggling carriers in the region. Photographer: Alessia Pierdomenico/Bloomberg , Bloomberg

(Bloomberg) -- Italy is considering a new 100 million-euro ($121 million) cash injection for bankrupt airline Alitalia, according to people with knowledge of the matter.

The government led by Prime Minister Mario Draghi has already allocated 50 million euros to pay for the carrier’s April salaries, amid protests by workers on the streets of Rome and at Fiumicino Airport, the company’s main national hub.

Talks with the European Commission to set up a successor to the failed airline -- to be called Italia Trasporto Aereo SpA, or ITA -- remain deadlocked. The EU is demanding a clear separation between the assets and personnel of the bankrupt carrier and its replacement. As a result, the startup for the new company has been postponed from April until July 1, Chief Executive Officer Fabio Lazzerini said in parliament on April 27.

The most recent cash injection will likely be sufficient to keep the company afloat for the summer season, according to the people familiar.

Alitalia continues to operate flights, but the carrier has been under administration since 2017 and last month paid half-salaries to its 11,000 staff. The loss-making airline has been kept afloat by regular injections of public money and low-cost competitors have been taking advantage of its weakness by expanding in Italy before an expected summer travel rebound.

A spokesman for the Italian Treasury declined to comment for this story.