Where Can You Fly Right Now? Americans Jet South to Caribbean Beaches - BLOOMBERG 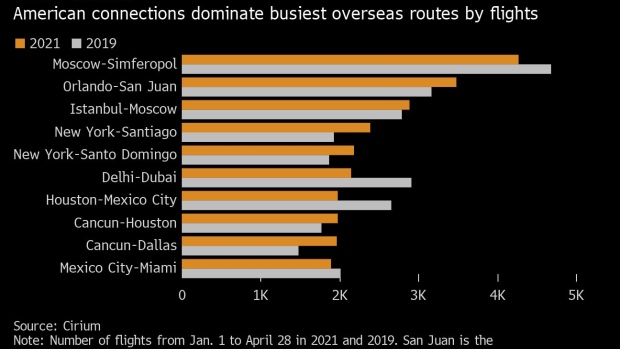 People sit in the outdoor dining area of a restaurant in Saint Croix, Virgin Islands, U.S., on Sunday, March 28, 2021. Across the Caribbean, the impact of COVID-19 on the travel and tourism industry has been very apparent, the Caribbean Tourism Organization (CTO) said in a report. 2020 saw a 65.5 percent drop in tourist arrivals to the Caribbean. , Bloomberg

(Bloomberg) -- The U.S. is spearheading a nascent revival in overseas air travel as people jump at the chance to fly to destinations in Mexico and the Caribbean without quarantines or other Covid-related restrictions.

New York to Santo Domingo and Santiago de los Caballeros, the two biggest cities in the Dominican Republic, are among the world’s busiest overseas routes this year, according to aviation analytics company Cirium. Neither made the top 10 before the pandemic. Orlando to San Juan in the U.S. territory of Puerto Rico sits at second-busiest overall, behind Moscow to Simferopol, in the disputed Crimea region.

While President Joe Biden hasn’t yet acted to lift entry restrictions on visitors, Americans are going to places they can easily get to — like Puerto Rico or the U.S. Virgin Islands, where they don’t necessarily need a passport, though a negative Covid-19 test is required. The Dominican Republic opened to tourists in July and offers U.S. travelers in-hotel tests before they return home. It has dropped a requirement for a negative test on arrival.

Mexico is open to quarantine-free air travel from the U.S. and doesn’t require a negative test, though visitors need one to return home after trips to popular holiday spots such as Cancun. While the test requirement threatened to hurt bookings, discount airline Volaris responded by subsidizing the extra cost. The move helped sustain a growth surge that has led the carrier to become Mexico's biggest during the crisis, with capacity levels that exceeded pre-pandemic levels as early as December.

Globally, air travel is recovering in fits and starts as vaccine drives progress at a disjointed pace and governments tighten border rules to address flare-ups. Overall capacity inched ahead this week but still hovers at around 57% of 2019 levels, based on Bloomberg’s weekly flight tracker, which uses OAG data to monitor the pulse of the global air-travel comeback.

While the U.S. and Western Europe make plans for  summer reopenings, countries are cutting ties with India: Australia barred even its own citizens from returning home from the stricken nation. Quarantine-free travel bubbles are seen as a way to pry open links, yet they have proved fragile too. Hong Kong and Singapore now have a May 26 start date after earlier delays, though a growing virus cluster in Singapore poses a fresh threat.

The paucity of international flight paths has inevitably concentrated demand on the relatively few places that are open. Many of the most popular Latin American routes out of the U.S. have more flights now than in 2019. With major international markets still closed, overseas travel will be dominated by short flights “for some time,” said John Grant, chief analyst at OAG.

Airlines in Western Europe have added flights to warmer destinations like Greece and Cyprus, as governments ease lockdowns with summer approaching. Capacity to Greece has jumped by almost 50% in the past four weeks, as it forms bubbles with countries that have had robust vaccine roll-outs and are deemed safe. There were week-to-week capacity gains of 10% or more in Spain, Italy and Germany, where a vaccine drive is gaining pace, according to OAG.

The U.K. has plans to reopen to leisure travel in mid-May, with a Green List of least-restricted countries likely to include Singapore, Hong Kong, Australia, New Zealand, Israel and Iceland, along with some Caribbean destinations, according to the head of London’s Heathrow airport. Details could be announced this week.

American Tourists May Be Allowed in London as Soon as May

Like Greece and Cyprus, Russia and Ukraine have also seen boosts as they loosen rules and attempt to attract tourists.  The two countries have recovered almost 90% and 80% of 2019 capacity, respectively. Others, like Kazakhstan and Iran, are close to 2019 levels as well. Ukrainian charter and commercial-flight operator SkyUp Airlines has tapped the opportunity, expanding its network to Belgrade in Serbia, Almaty in Kazakhstan and the Georgian Black Sea resort of Batumi.

Still, there’s a long way to go. The top 10 international routes prior to the pandemic, like London-to-Amsterdam, have disappeared from the rankings altogether. The busiest routes globally are all domestic connections, primarily in Asia, according to Cirium — including the world’s most-flown route, between Seoul and the South Korean holiday island of Jeju. Even there, the volume of flights has dropped 20%.

In Australia and New Zealand, a new travel bubble has helped to boost traffic at Qantas Airways Ltd. and Air New Zealand Ltd., while Virgin Australia Airlines Pty, in the hands of private equity after a bout with insolvency, and Regional Express Holdings Ltd., have also seen a benefit from a domestic travel boom.

The potential Hong Kong-Singapore bubble, originally planned to start last November, could also release pent-up demand. While cases remain low in both Asian financial hubs, each has taken an extremely cautious approach to opening its borders. If their air link comes to pass, it would show momentum can build even in places with the tightest controls on entry.