Where Can You Fly Right Now: Brits Rerouted to Algarve With Spain and Greece Off Limits - BLOOMBERG

by  Siddharth Philip and Layan Odeh 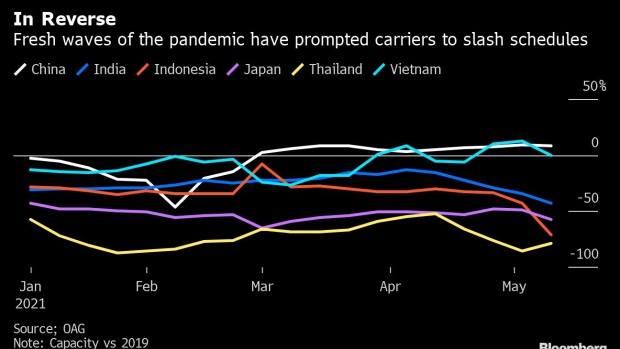 (Bloomberg) -- Airline operators in the U.K. were prepared to quickly ramp up flights to popular destinations in Greece and Spain. They got Portugal instead.

Even as carriers quickly shift capacity to Lisbon and Faro in the Algarve, they're pressing U.K. officials to add the two larger Mediterranean nations to the list of countries marked green in the traffic-light border system unveiled last week. Portugal is too small to single-handedly deliver a summer travel boom for airlines at risk of missing a second straight high season because of the coronavirus pandemic.

The big prize would be Spain, the most popular holiday destination for Brits, who along with Germans make up the largest source of tourists in Europe. Carriers had bet heavily that Spain or at least its islands would be green-lit. They added almost 70,000 seats on flights headed there for the week of May 17, when U.K. borders will start to loosen, according to data from flight tracker OAG. From the U.K. to Greece, the schedule exploded by 1,600% week-to-week.

“Airlines were certainly second-guessing what would happen,’’ said John Grant, chief analyst at OAG. The government of Prime Minister Boris Johnson held off on the announcement till May 7, after elections were over. The timing “gave airlines less than a week to change their schedules and make any adjustments necessary.”

U.K. airlines and airports are now lobbying for the government to add Greece and Spain to the green list. The Greek tourism minister was in London this week to meet with U.K. counterparts and airlines about reopening links. In a sign of optimism, IAG SA flagship British Airways is adding more than 90,000 seats to sunny spots including the Greek islands of Corfu, Kos and Kefalonia, along with Spain’s Canary Islands and Bodrum in Turkey. But the flights won’t start until June 21.

Globally, air travel is still struggling to gain traction in its recovery from the pandemic. Capacity remains at about 57% of pre-crisis levels — unchanged from the previous week — based on Bloomberg’s weekly flight tracker, which uses OAG data to monitor the pulse of the comeback.

While frustratingly slow for airlines, the progress in the U.K. has helped Europe establish some momentum restarting air travel after lagging behind Asia and North America throughout the health crisis. In the European Union, infection rates are dropping and vaccine campaigns are advancing. The bloc’s Green Digital certificate should provide a boon to regional travel by the end of June.

On Tuesday, Moody’s Investors Services weighed in, revising its global outlook for the industry to positive from negative.

“We expect increasing vaccinations will lower border restrictions and increase demand for air travel over the next 12 to 18 months,’’ said Jonathan Root, a senior vice president at the credit-ratings firm. “Leisure traffic will lead the charge to the boarding gates, while corporate trips and international long-haul will follow, initially at a slower pace.’’

Among regions, a changing-of-the-guard is at hand, with North America gaining steam over the past week while activity in Asia dropped precipitously.

Major markets including Pakistan, Indonesia, Vietnam and Japan have seen air-travel recoveries reverse direction as authorities try to stem rising infection levels. A massive Covid-19 outbreak in India has already led to a plunge in flights there.

In the U.S., the number of seats being offered jumped 5%, according to OAG. Higher bookings are being fed by rising vaccination rates and an easing of travel restrictions, according to Airlines for America, the industry group that counts American Airlines Group Inc., Delta Air Lines Inc. and United Airlines Holdings Inc. among members.

While a domestic travel rebound has helped — along with hops to the Caribbean — executives at U.S. and U.K. airlines lobbied the countries’ transportation secretaries on Tuesday to reopen highly profitable trans-Atlantic routes.

Like with many aspects of the pandemic, the air-travel recovery appears K-shaped, with carriers in a handful of countries flying at pre-pandemic levels or above, and hubs in other countries still quiet. The contrast is especially true in Asia, where — as in the U.S. — Chinese airlines are being buoyed by strong domestic market as other national markets fall away.

The stakes are extra high in Japan, where Prime Minister Yoshihide Suga extended a state of emergency with less than three months to go before Tokyo hosts the summer Olympics. The edict covers the capital city and two more regions hit by rising virus cases, in an attempt to stem infections.