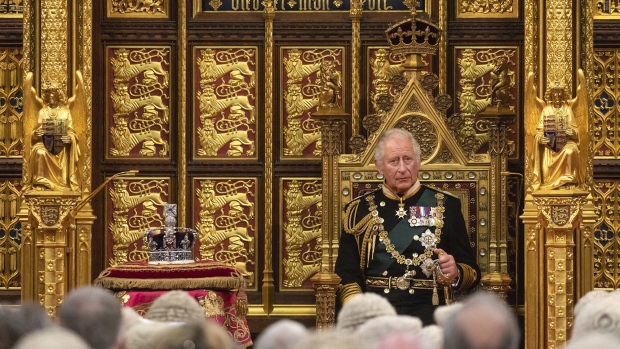 LONDON, ENGLAND - MAY 10: Prince Charles, Prince of Wales sits by the Imperial State Crown as he delivers the Queen’s Speech during the state opening of Parliament at the House of Lords on May 10, 2022 in London, England. The State Opening of Parliament formally marks the beginning of the new session of Parliament. It includes Queen's Speech, prepared for her to read from the throne, by her government outlining its plans for new laws being brought forward in the coming parliamentary year. This year the speech will be read by the Prince of Wales as HM The Queen will miss the event due to ongoing mobility issues. (Photo by Dan Kitwood/Getty Images) , Photographer: Dan Kitwood/Getty Images Europe

(Bloomberg) -- Elizabeth II’s death at the age of 96 marks the start of a tumultuous 10 days for the UK that will see a queen buried, a nation mourn its longest-reigning monarch, and a new king proclaimed.

Within hours, Prince Charles, the eldest of Elizabeth’s four children, will be formally proclaimed king in a ceremony dating back hundreds of years. At 73, he is the oldest person to accede to the throne in British history.

Flags will fly at half mast as the country embarks on a period of national mourning. Normal politics will be suspended as tributes flow in from around the world. In London, the Queen’s coffin will be placed in Westminster Hall prior to her state funeral, which will be marked by a public holiday.

The next two weeks will be a jolt for a country accustomed to being ruled by the same monarch for more than 70 years -- longer than 85% of the population have been alive. Charles will now have to steer the near-immutable institution of monarchy in a country that has altered beyond recognition since his mother’s accession. His kingdom faces potential breakup as Scotland presses for independence and an uncertain position in the world after leaving the European Union.

Here’s a guide to the early days of Charles’s reign are expected to play out:

How is a new king made?

By law, Charles automatically became King the moment his mother died. Formal recognition will come from the so-called Accession Council, usually convened within 24 hours of the death of a sovereign.

The group includes members of the Privy Council -- historically the sovereign’s most trusted advisers. If she’s in or near London, the prime minister is also likely to attend the meeting at St. James’s Palace. Also present will be officials from the City of London, the capital’s main financial district, and the Commonwealth, a group of nations mainly comprised of onetime members of the British Empire.

In modern times, the Privy Council’s ranks have been drawn from politicians, aristocrats and clergy, but its origins date back to the seventh century Anglo-Saxon “Witan” or group of wise men who would advise the monarch and oversee the succession.

After the meeting, the new sovereign will be proclaimed by the courtier in charge, known as Garter King of Arms, who will make a speech from the Proclamation Gallery overlooking Friary Court in the palace. That address is then repeated across towns and cities across the nation in a tradition that pre-dates modern communications. Expect to hear: “The Queen is Dead. Long live the King.”

It’s also customary for the new sovereign to say something memorable which is later formally published in the government’s official record, the London Gazette.

Will he be called King Charles?

The newly-proclaimed monarch won’t necessarily become known as King Charles III because English monarchs are entitled to choose their names. History provides a clue for why he may be reluctant to use his own name: a previous King Charles was beheaded in 1649 when England became briefly became a republic under Oliver Cromwell.

King Edward VIII chose Edward as his regnal title, although he was known to his family and friends as David. By contrast, Charles’ mother stuck to Elizabeth, her given name.

Will his wife become queen?

Charles’s second wife, Camilla, Duchess of Cornwall, has risen in popularity as Britain moved on after the early death of Diana, Princess of Wales in a car crash in 1997.

In 2022, Queen Elizabeth instructed that her daughter-in-law would be known as Queen Camilla, a reward for her support to Charles and her role as a working royal.

What happens during national mourning?

Flags on public buildings will fly at half-mast -- except on the day when Charles is proclaimed king -- and books of condolence will be opened at British embassies around the world. But the public will still be expected to come into work and shops will stay open.

The Queen’s body will lie in state in Westminster Hall -- the 11th century heart of the Houses of Parliament. Her coffin will rest on a catafalque and be guarded by members of the armed forces. Members of the royal family, including Charles’s eldest son and heir Prince William, are expected to stand vigil, just as they did when Queen Elizabeth’s mother lay in state in 2002. Members of the public will also be able to file past and pay their respects.

Who will attend the state funeral?

Presidents and royalty from around the world are likely to attend the service in Westminster Abbey, just meters from where the queen will be lying in state.

If it takes place on a weekday, a national holiday will be declared and the London Stock Exchange will shut.

When will Charles be crowned King?

His coronation won’t take place immediately. Planning will only begin in earnest once the period of national mourning has finished. Almost 16 months elapsed between his mother acceding to the throne and her coronation in 1953. But it’s unlikely Charles will wait as long given his age and reduced public deference to the institution.

The Coronation at Westminster Abbey will be a major ceremonial event attended by leaders from around the world. His mother’s was one of the first national events to be televised, if only in grainy black and white, and drew an audience of millions.

The service is designed to introduce the sovereign to his people and underline how the monarch’s authority derives from God. During the ceremony, Charles will be anointed with oil and will swear the Coronation Oath -- a promise to govern according to the law, exercise justice, and uphold Protestantism.

Charles will automatically be head of the Church of England, but, in a break with the past, the service is likely to include other Christian denominations and other religions.

In another departure from tradition, don’t expect the service to be crowded by members of the House of Lords. At his mother’s coronation, tiered stands had to be built to accommodate as many nobles as could fit in the ancient building -- a hangover from when aristocrats paid homage to the monarch. Almost all hereditary peers were removed from the upper house in 1999.

What powers will Charles have as King?

Charles’s role is heavily constrained and largely ceremonial. He will have to stay neutral in politics -- a potential challenge for a man who has in the past clearly expressed his views on issues ranging from protecting the environment to the failings of modernist architecture.

Though he formally appoints the prime minister, he is required to appoint someone who enjoys the support of the majority of Members of Parliament. No monarch has fired a government on his own account since William IV dismissed Lord Melbourne in 1834. No sovereign has vetoed an act of Parliament since Queen Anne in 1708. Charles will attend the state opening of Parliament each year -- but the so-called King’s speech he delivers is written by his ministers.

That’s not to say Charles will be purely a figurehead. He will wield considerable influence. He will see all government papers he wishes, hold weekly audiences with his prime ministers, and receive foreign dignitaries. He will also be head of the armed forces: British soldiers swear an oath of allegiance to the monarch, not to the government of the day.

Will he be head of the Commonwealth?

Yes. Charles will also become head of the Commonwealth, the group of 54 nations that has its origins in the British Empire. Though the position isn’t hereditary, Commonwealth leaders declared in 2018 -- after a request from the Queen -- that the position would pass on to her son.

But some have argued the Commonwealth would be better served by a rotating head among its members, reflecting the modern relationship the states have with one another as equals.