Investors Are Piling Into Crypto Startups—Just Not in China - BLOOMBERG 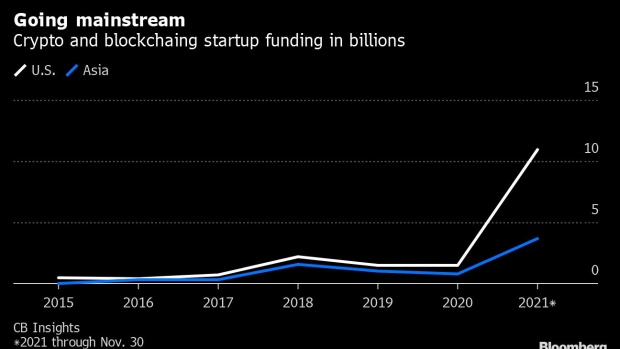 Illustrative bitcoin tokens in the window of a cryptocurrency exchange kiosk in Istanbul, Turkey, on Monday, Nov. 8, 2021. Bitcoin and Ether hit all-time highs in a cryptocurrency rally that some analysts attributed partly to the search for a hedge against inflation. Photographer: Moe Zoyari/Bloomberg , Bloomberg

(Bloomberg) -- For the first time in four years, venture investors are backing more crypto and blockchain startups in the U.S. than they are in Asia—a sign that China’s crackdown on alternative currencies has chilled the country’s upstart industry.

Though the country was once a crypto capital, China’s new restrictions on tech companies have driven down the number of cryptocurrency and blockchain startups getting funding, according to year-to-date data collected by research firm CB Insights. Beijing forbid crypto mining and banking operations this spring and then banned all transactions in September, forcing many founders to shutter operations or relocate.

But as China’s cryptocurrency and blockchain companies fade, in the rest of the world investment dollars have increased dramatically. The fourth quarter of 2021 is already the biggest ever for crypto startup investing, “and we’re not even into December,” Bendsten said. Globally, the value of venture investments in the industry surged from $3.1 billion in 2020 to $21.3 billion through Nov. 30—a more than sixfold increase.

The number of deals in China fell by more than half from 2020, to 41 so far this year. Meanwhile, the total value of funding to crypto and blockchain startups in the country also fell by about a third to $214 million. In the U.S. it climbed more than sevenfold to $10.9 billion.

The global increase is a signal that the sector is finally edging into the mainstream. Investors in venture capital, private equity and corporate venture capital are “all believers now, and we’re only going to see this trend continue next year,” Bendsten said.

Indeed, generalist venture firms like Bain Ventures are in the process of raising distinct crypto funds. Others, like Lightspeed Venture Partners, are planning to build expertise in the field. “In the next few years every partner at Lightspeed will become fluent in crypto,” said Lightspeed’s Amy Wu. “It’s going to be the internet of our generation.”

David Pakman, a longtime partner at Venrock who joined crypto firm CoinFund in October as managing partner, said he’s seen interest surge since Coinbase Global Inc. went public in April. “That woke up a lot of the traditional investors,” he said, adding that family offices and endowments have been among those to invest this year. For example, the Harvard and Yale university endowments both backed the new VC fund Paradigm, according to the Financial Times. In November, Paradigm closed a $2.5 billion fund—the largest yet for a crypto-only firm.