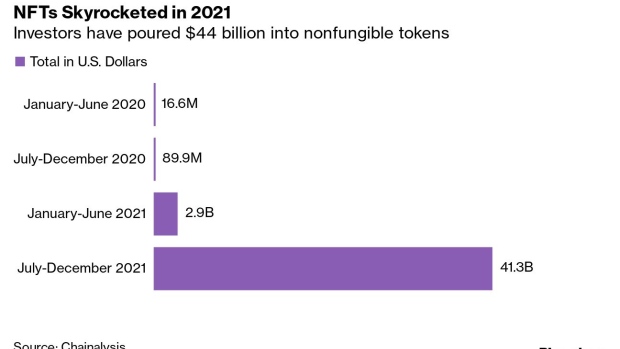 (Bloomberg) -- It’s one of the hottest corners of crypto -- and now the U.S. government wants its share of the profits.

Investors and creators of nonfungible tokens -- a market that has ballooned to $44 billion, Chainalysis data show, and attracted fans from Justin Bieber to Melania Trump -- face billions of dollars in taxes and rates as high as 37%, according to tax experts. Internal Revenue Service officials who deal with tax evaders say they are gearing up for a crackdown.

The surprises looming for NFT enthusiasts when tax filing season begins this month are crypto’s latest wake-up call from Washington as officials across the U.S. government set their sights on the burgeoning industry. The rules about taxing tokens aren’t clear, leaving NFT collectors scrambling to calculate how much they owe. Investors may not realize they need to pay any taxes at all or that they should file more than once a year, increasing the odds they’ll face future penalties.

“You don’t get to not report gains or losses because the IRS has failed to provide guidance that meets your expectations,” said San Francisco-based tax attorney James Creech. “The harder it is for people to get to a reasonable -- or ideally, a right -- conclusion, the easier it is to ignore it.”

NFTs gained attention as representations of digital art and are expected to be a key part of the so-called metaverse that tech titans like Mark Zuckerberg say is the future of the Internet. The tokens are digital certificates of authenticity and can’t be replicated, which potentially increases their value.

Token sales skyrocketed last year, with NFTs such as CryptoPunk #3100 -- which features an alien sporting a headband -- selling for $7.7 million after an initial price of $2,000 in mid-2017. “Everydays: the First 5000 Days” from digital artist Mike Winkelmann, also known as Beeple, sold for an eye-popping $69.3 million.

Like so much in the crypto universe, it’s hard to compare tokens to more traditional investments and regulators including those at the IRS are grappling over how to police them.

When a creator sells an NFT on a platform like OpenSea or Rarible, most tax experts agree that the profits should be considered ordinary income and be subject to a rate as high as 37%. Investors who buy the tokens owe capital-gains taxes if they used another cryptocurrency for the purchase, and when they sell it.

Beyond that, the rules are murky. There are questions about whether tokens should be taxed like art “collectibles,” which comes with a long-term capital-gains rate of up to 28%. That’s compared to 20% for most cryptocurrencies and stocks. The infrastructure bill President Joe Biden signed into law last year will make it harder for people to hide digital assets, but the Treasury Department has not said whether that includes NFTs.

It’s hard to calculate exactly how much tax is owed, but experts such as Arthur Teller, chief operating officer at TokenTax, estimate the total NFT tax bill could run into the billions. Some people aren’t aware they owe taxes quarterly and may already face penalties for just filing an annual return, said TokenTax’s co-founder, Zac McClure. Other people likely don’t know there are any reporting requirements, said Shehan Chandrasekera, head of tax strategy at CoinTracker.

With so much money at stake, the IRS will likely be forced to clarify the rules, but it may begin auditing people first, said Michael Desmond, the former chief counsel at the IRS who is now a partner at Gibson, Dunn & Crutcher.

IRS investigators are preparing for a possible surge in cases as soon as this year.

Meantime, NFT aficionados should brace for a lot more paperwork.

“It’s an absolute nightmare,” said Adam Hollander, an NFT investor and creator of the “Hungry Wolves” collection, adding that he has spent 50 hours combing through months of transactions. “There are people who aren’t going to be willing to do what I’m doing.”